Electronic music is only one shade on ill-esha’s (real name Elysha Zaide) palette.  With a lifetime of deep appreciation for classical, world, jazz and anything cinematic, it was natural that the art of scoring would catch her interest.  As a child, she completed Royal Conservatory piano training to nearly its highest level; sang soprano for a stint in the Vancouver Bach Children’s choir; performed musical stage productions with VYT and Carousel Theatre companies and studied flute in the school band (but did not go to band camp with it).

In 2007, Elysha’s songwriting efforts were recognized when she placed in the top 3 finalists for Best Electronic in the John Lennon International Songwriting Contest.  A year later,  she was granted the Screen Composers Guild of Canada apprenticeship award for Vancouver, which sponsored her training and subsequently led to work with renowed composers Daniel Ingram (Martha Speaks, My Little Pony), Graeme Coleman (BeastMaster) and Brian Carson (Hot Wheels, ChopShop).  After several years of working as assistant music editor on series such as Martha Speaks, Combat School, and The Week the Women Went, Elysha’s electronic music career began to demand her full attention and she relocated to the United States.  Although quite busy with gigs, she continued to explore scoring for many forms of media including the quickly growing mobile app market, and was nominated for Best Score in the Canadian Videogame Awards for her work on the iOS game, “Big Top Ballet”. Most recently, she has completed two scores for the National Film Board of Canada (“Beauty” and “Sandra Oh: Inspiration”), and is currently accepting projects.

Below are highlights of her diverse composition range.  Feel free to contact her with your project for review! 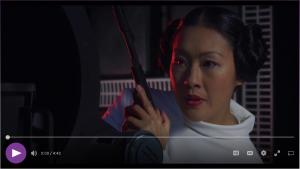 All styles of music including classical, folk and musical/big band